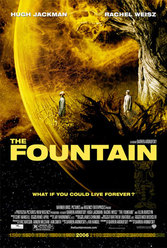 Last week was mainly spent seeing films that come out Wednesday. And of those new releases, it's the one apt to polarize viewers - Darren Aronofsky's tripped-out sci-fi love story The Fountain - that most impressed me.

Happy Thanksgiving to all, and check back next week for reviews of numerous Oscar contenders, including The Good German, The Pursuit of Happyness, The Blood Diamond and Señor Anti-Semitism's Apocalypto.

Let the hating begin! One of my least favorite online critics just gave the movie a zero, and has backed their opinion up with all the force of a flock of dodos. There are some critics who you respect ever though disagree with them, others vice versa. This person has taste almost completely opposite mine and a lack of logic to boot.

I'm curious about which critic you're specifically referring to. But I'm not surprised to hear that the nastiness has begun.

It's only bound to get worse, though I'm hopeful some critics will - whether they ultimately like it or not - try to take it seriously.

I don't know about Rob, but Steve Rhodes' review was the one that roused my ire. Written without a shred of intelligence, citing "my wife thinks its the worst film she's ever seen" and "my audience sat in stone silence [through this] bad movie" removes any and all credibility from him as a writer/critic.

Judging from box office receipts, the public loved Da vinci Code and Click, so they must OBVIOUSLY be one of the years best movies!

I wonder if you're referring to OGO, Rob? If so, I tend to agree. Either way, Hugh Jackman = Man of the Year. How many films is that now, like 6?

I'm not in the business of slamming other critics (at least in print). But it does surprise me that a film as rich and complex and daring as The Fountain is so hastily dismissed by most mainstream critics, as if it's just a bunch of nonsense that's best looked upon with smirking disdain. It's rare these days that a filmmaker actually takes a risk as big as Aronofsky does here - with studio money, no less! - and yet the knee-jerk reaction seems to be to slam him for going out on a limb.

It just goes to show you that while many profess to hate the junk that rolls off the studio assembly line and into theaters each Friday, most still prefer it to challenging, artistic films.

I'm still refusing to name names (I'll respond to your question in an e-mail Nick, but between school and Altman's passing, I hadn't found the time just yet), as it would suggest personal ire (of which there is none) and would also be potentially, unintentionally immature (seeing as I'm attempting to gain some foothold in the critical world and I do want to respect my elders).

Nonetheles, I'll second Nick's comments about the hypocrisy of so many so-called film lovers. I like much of what Jim Emerson said in his review of the film: yes, it's quite often silly, outlandish, maybe even naive and (god forbid) pretentious, but it reaches so far and believes so deeply that I, quite frankly, can't bloody imagine being able to dismiss it so easily or so absolutely. It is by far the boldest movie I have seen in many years, and while it was far from perfect, it felt more COMPLETE than any movie I've seen this year, by far.

For the record: anyone who doesn't "get" the movie at ALL (as someone people seem to proclaim), is, quite frankly, beyond help. If anything, the movie stated its themes a little too blatantly and too often for my taste. But my god, if half of all movies that came out had by 1/10th of The Fountain's courage, audacity, and boldness, then the world of cinema would be a far richer place.

Wow, is that what Emerson wrote? If so, his thoughts echo my own (and, in fact, mirror some of the points I made in my own review).

A few others have also, I see, come to the film's defense, including Aaron Hillis, who wrote a great review for The Reeler. But it's not the lack of love that's really irked me about the reviews - rather, what I find so troubling is many critics' apparent refusal to even attempt to engage the film.

As for the critic in question, feel free to email me whenever.

Yeah, Jim's was right up the same alley, but if I stole any of your thunder, it was inadvertant (it was a very good review, btw).

One of Emerson's best points, imo:

"Yes, "The Fountain" overreaches on every level, and that's exactly what I like about it. Big subject, big canvas, big ambitions. A young director's ungainly and overwrought folly? By all means, in the sense that Paul Thomas Anderson's "Magnolia" or Gus Van Sant's "My Own Private Idaho" or Martin Scorsese's "New York, New York" or Bernardo Bertolucci's "1900" are follies."

Many "classic" movies are the same kind of ambitiously flawed endeavor; my gut tells me that "The Fountain" isn't going to be forgotten any time soon.

And I'm definitely with your last point: after having seen it, I'm not against the idea of people disliking it at all - it's a movie as flawed as it is grand - but the general consensus seems to be that it was foolish for a filmmaker to even approach the subject matter in the first place, which is a notion that I cannot tolerate.

No worries - no thunder stolen.

Thanks for the shout out, my man. I gave my ten bucks' worth of support with a second viewing this Thanksgiving, which convinced me even more that -- whether or not it works on anyone individually -- its ambitions and sincerity demand to be treated with more dignity. What I find most dubious is how often the word "failure" has been thrown around... uh, then what would've qualified its success?

A veteran like Richard Corliss shouldn't have to write pieces called "I Admit It: I Liked The Fountain." Me, I'm thinking more and more that this one is strong enough for my year-end list. I even got choked up! Twice! With no shame!

That Richard Corliss piece's title is close to atrocious, as if - just because many critics chose to deride the film - he has to act as if it's some huge, daring departure to admit to liking it.

I also tried to throw The Fountain some of my money today, but plans went awry (a Monday screening, however, isn't out of the question). And if my (increasingly fond) memory of the film is backed up by a second viewing, I too may have to clear some space on the ol' year-end list...

I was taken aback by some bits, but I still loved it, and I predict that I'll love it even more the second time, which may be tomorrow. It may even find its way to the top of my 2006 top ten list.

Glad to see that this has become an oasis for Fountain fans.

Well, I can report that it does work better the second time. The flaws feel less like flaws -- the melodrama feels genuine, the sentimentality natural, the themes nuanced -- and you start to fully appreciate the poetry of the whole thing. And that's what I think that it is, a poem rather than a story, and I think that that is a major reason why so many people are responding negatively to it: They expect a full narrative enhanced by some action and eye candy, but instead they get a poem that relies heavily on its visuals, formal and verbal conceits, and nonsensicality to work its magic. To the haters, this seems like the epitome pretentiousness, but then they are mistaking ostentation for pretension (even if the dictionary suggests that they are synonyms). Here, the ostentation is forgivable, even merited and welcome, because the very nature of its themes and philosophy can be anything but hushed, solemn, or downplayed. After all, death is the scariest thing for man to face, and the realization of one's mortality is an essential part of being human. If people deal with mid-life crises by blowing tons of money on shiny new convertibles, endless plastic surgery, and other such ridiculous, extravagant behaviors, then Aronofsky has every right to take an "out there" approach to his story about facing, accepting, and celebrating human mortality -- and by extension the simple value of life.

For me, it's a masterpiece. And if it's flawed, then it is magnificently so, in the same way that Apocalypse Now is.

Good point about the fact that Aronofsky's extravagant approach is in keeping with the enormity of his themes.

While many have derided its ideas about life, death and love as immature and simplistic, I see Aronofsky as simply taking a bold, heartfelt approach to confronting big, fundamental topics about human existence. It's true that saying "death is a part of life" may not be the most original thing a filmmaker ever did. But it doesn't mean such a contention isn't true or a valid notion around which to build a film. For many, though, the fact that The Fountain addresses such topics seems to be its first crime, as if they're too obvious and uncomplicated to demand serious consideration (which, I think, Aronofsky grants them),

Anyway, will have to find some time admist the onslaught of December screenings to check it out again...

Caught it a second time tonight. Most of my criticisms (which were tenuous in the first place) diminished or disappeared outright. It's an inherently flawed film, and at this point I'm just chalking that up to how much I like it.

Glad to hear it held up, Rob. It's news that just makes me more anxious to wedge a second viewing of the film in amidst all my (depressingly unpleasant) screenings of would-be Oscar contenders...