Best Worst Movie is a love letter to Troll 2, that 1990 paragon of crappy cinema. And like all love letters, the documentary – directed by Troll 2’s child star, Michael Stephenson – is a warm, jovial and decidedly uncritical look at both the film and its rabid fans. Italian director Claudio Fragasso’s pseudo horror story, about vegetarian goblins and the bizarre family they wish to eat, has risen from its original direct-to-video grave thanks to a so-bad-it’s-good reputation. Stephenson certainly captures the fervor of its admirers and the embarrassment felt by most of its cast, who at the time thought their participation in the project was the next step to stardom rather than ignominy. The focus is most squarely on the film’s nominal lead George Hardy, a gregarious man (now working as a dentist in Alabama) whose enthusiasm for Troll 2’s revival comes partly from the unexpectedness of the phenomenon, and partly from his continuing desire to realize his actor dreams. Catching up with Fragasso (convinced his work is good) and other cast members (some of whom are saner than others), as well as tagging along to reunion screenings and trade shows, the doc conveys the passion of cult-film enthusiasts while also, during its home stretch, expressing how clinging to a work of art this lousy – no matter how endearingly lousy it is – borders on the pathetic. In this regard, though, Best Worst Movie doesn’t go far enough, avoiding any real examination of over-the-top fandom and its frequent festishizing of artistic incompetence. The “fun” of watching Troll 2 involves condescendingly looking down on (and laughing at) it, and why so many adore feeling superior to a cruddy B-movie remains a pertinent issue throughout. Yet it’s one that Stephenson ultimately avoids, choosing to celebrate the film for those few things he can (it’s sincere! It’s unique!) but never investigating why those qualities alone warrant admiration, much less the type of fervent zeal that’s directly led to this non-fiction tribute in the first place.

An unwavering melding of substance and style, Robin Hood is colorless through and through. Ridley Scott’s retelling of the famed archer’s legend is (groan) an origin story that, on the basis of its conclusion, seems designed to kick-start a franchise, a repellent possibility in light of this saga’s wretched dullness. Shot in flat grays and browns and perpetually encased in shadows, Scott’s film may be his most visually unattractive yet, although if his drab aesthetic drains all life from the frame, it’s nonetheless in keeping with his enervating narrative. With only a day’s worth of rewrites, all traces of Robin Hood could have been erased from this story. Still, even as is, the director’s latest is little more than a generic medieval actioner, one that not only seems to utilize the costumes and sets of his Kingdom of Heaven, but also employs that predecessor’s helter-skelter combat photography to muddled effect. That said, no cinematographic panache could salvage Brian Helgeland’s graceless script, which charts Robin (Russell Crowe) as he abandons the army of King Richard The Lionhearted (Danny Huston) over the monarch’s cruel Crusades treatment of Arabs (skimpy contemporary political subtext!), and then travels to Nottingham to return the sword of a fallen comrade whom he chooses to impersonate, a ruse that leads him to the home, and soon the heart, of icy proto-feminist Marion Loxley (Cate Blanchett).Robin’s sole characteristic is noble selflessness, which he learns – after recovering repressed memories with the help of Max von Sydow’s blind sage-cum-psychiatrist – were passed down from his activist father. Like everything else about this standard-issue slog, however, Scott can’t be bothered to flesh out this key thematic angle. Royal court intrigue also abounds, most of it involving newly crowned King John (Oscar Isaac) and his traitorous right-hand man Godfrey (Mark Strong), who’s in league with the French to stage a coup, and whose villainy is visualized via a facial scar. Alas, there’s nothing actually intriguing about this material, sluggishly conceived and purposeless as it is. Robin Hood unimaginatively mimics Braveheart’s basic template – hero fights the ruling power in service of affording all men socialist liberty – and then, during its finale, attempts to replicate Saving Private Ryan’s Normandy Beach sequence, a climax that’s all blurry, incoherent images of stampeding horse hooves and clanging weapons. At every turn, Crowe and Blanchett fail to add nuance to cardboard cutout roles, while Scott, going in the polar-opposite direction of Errol Flynn or Kevin Costner’s 1991 Prince of Thieves, avoids any sense of dashing heroism or lively flair, opting instead for a gritty realism that’s proven insincere by his lusty fondness for clichés. Monotonous, meandering, and suspense-free, it’s a mega-budgeted period piece that’s epic only in its waste of talent and resources. 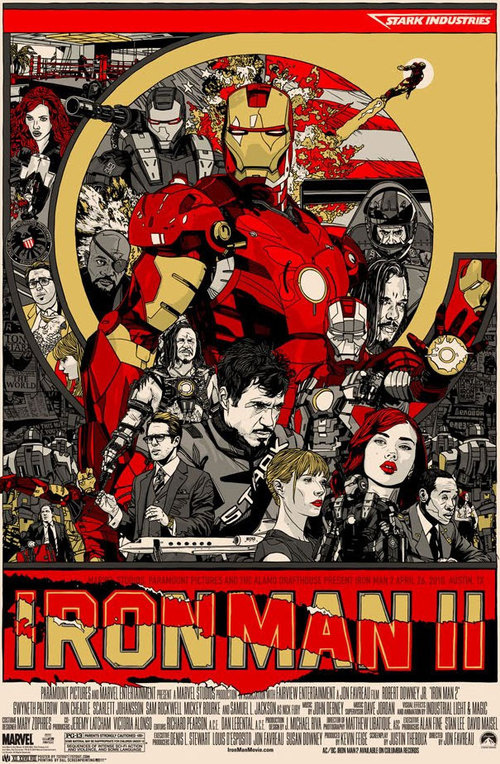 Kicking the week off here with a new link collection, including my thoughts on a bunch of Tribeca Film Festival films as well as this past weekend's #1 film, Iron Man 2.

Plus, my first video game review over at The House Next Door, for a new Namco title.

Dead to Rights: Retribution (The House Next Door)