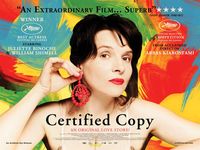 An astonishingly multilayered portrait of a romantic relationship that doubles as a commentary on the value of reproductions – and, thus, the cinema itself – Certified Copy finds Abbas Kiarostami returning triumphantly, after years of DV experimentation, to the realm of narrative filmmaking. From conversational scenes set inside a car to discussions being interrupted by pesky cell phone calls, Kiarostami’s hallmarks remain intact, as does his gift for canny, intricate plotting. In this instance, that concerns the apparent first-time meeting between French art dealer Elle (Juliette Binoche) and English novelist James (William Shimmel), whose latest philosophical book contends that artistic copies are the equal of their originals, and that an object’s meaning is altered by one’s perception of it. Meeting the morning after James’ promotional speaking commitment in Tuscany, as well as following a talk between Elle and her young son which suggests the boy knows more about his mother than he should (and she’d like), Elle and James embark on a car ride around the scenic region. Along the way, they contemplate a range of topics – the nature of happiness (and whether we should judge its forms), the purpose of existence, and the blissful convenience of living in the moment versus the requirement of adult responsibility – which all elicit intriguingly strong emotional reactions from Elle.

During a café pit stop, the proprietor presupposes that James is Elle’s husband, an assumption she plays along with, first tentatively and then so convincingly that (à la Close Up) the line between truth and fiction begins to blur – and then altogether collapses when the couple increasingly begins quarreling like an actual married couple. During this coffee-break interlude, Elle and the shop owner’s chat wends its way through a debate on the role of women, and their men, in relationships, laying the groundwork for the ensuing, contentious bickering between Elle and James over their varying opinions on love, commitment, and what constitutes togetherness and separation (matters filtered through exchanges about Warhol, Michelangelo’s “David,” and the Mona Lisa). Its here, in the latter portions of Certified Copy, that the filmmaker tantalizingly dances with a ballerina’s grace around the issue of what’s “true,” refusing to proffer easy answers through underlining or hand-holding. Rather, his surrealistic film demands engaged reassessment at every turn as it burrows into the fissures of an affair gone awry, plumbing the depths of petty and profound grievances to expose the ways in which trust, compassion and shared dreams (symbolically addressed during a church encounter with newlyweds) can crumble not from one cataclysmic event, but by a series of internal “changes” (James’ term) to both parties.

By journey (and story’s) conclusion, what Kiarostami seems to present is nothing short of a microcosmic day-long snapshot of a union’s inception, consummation and destruction, which further functions as the Iranian auteur’s own statement regarding film’s unparalleled capacity for conveying essential truths and experiences via inherently artificial means. His tale teases with questions about the “genuine” (are Elle and James married?) even as it both puts that term up for debate (since aren’t these two actors genuinely in each other’s company?) and deems it irrelevant. It’s a bit of meta-twistiness that’s delivered with incisive Buñuel-ian wiliness, as well as a formal assuredness that’s invigorating, not least of which because it calls so little attention to itself. Though virtually every edit articulates a pent-up sentiment and/or conceptual notion, Certified Copy never indulges in the type of look-at-me showmanship typically associated with such self-conscious endeavors. Rather, its style is as elegant as it is slyly expressive, with the director generating beguiling mystery via alluring close-ups, and often partaking in extended shot-reverse shot dialogues that capture an intimate sense of convictions both connecting and clashing.

More thrilling still, his camera regularly assumes a position directly opposite the current speaker, so that they’re talking not only to their partner but to the audience, a self-aware device that (like a humorous shot of a stranger apparently scolding his wife) acknowledges film’s synthetic composition. In these images, and also striking corresponding sights of Elle and James staring reflectively at themselves in bathroom mirrors, Kiarostami evokes a monumental sense of interiority, of pathos, and of empathy, even as his very gestures highlight the action’s scripted nature. For the writer/director, Certified Copy’s role-playing and cinematographic recreations of the world and human interactions convey emotions and ideas that are just as “authentic” as those found in reality. That’s certainly the case with Shimell’s turn, which layers James’ chilly rationalism with nuanced complexities that both justify and damn his supposed matrimonial conduct. Ultimately, however, it’s in the open, inviting visage of Juliette Binoche – delivering, in the performance of a lifetime, a stunningly raw, heartfelt portrait of excitement, longing, grief, need, resentment and melancholic mourning – that the director supplies incontrovertible evidence for his dramatically gripping, intellectually acute argument in favor of the unreal cinema’s ability to get at the real.