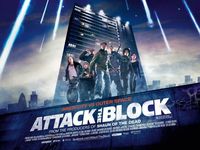 Hoodlums get to be heroes for a night in Attack the Block, an alien invasion saga that evokes far more childlike Spielbergian wonder than this summer’s similar Super 8, yet nonetheless somewhat stumbles in attempting to generate an unnerving sense of terror, raucous humor, or consistent empathy for its teenage protagonists. Writer/director Joe Cornish’s debut opens with Moses (John Boyega) and his five masked buddies mugging nurse Sam (Jodie Whittaker) at knifepoint on her way back to the apartment complex where they all live. It’s a deplorable act the film never quite gets over, even though it’s interrupted by a vicious alien plummeting into a nearby car, thus leading Moses and his crew to angrily chase and murder it. This killing has grave repercussions, since soon a horde of gorilla-wolf beasts – so black that they’re almost featureless, save for their glowing-white fanged mouths – are stalking the kids around their derelict block. That pursuit inevitably puts Moses back into the company of a still-furious Sam, where their racial and class differences are thrown into sharp relief so that Cornish can slowly redeem Moses – via a late visit to his apartment, which reveals him to be a product of neglectful circumstances – as a thug at once unrepentant about his criminal actions and yet noble enough to take responsibility for his role in escalating this extraterrestrial catastrophe.

Cornish’s outer-space monsters are gorgeously wrought and wisely underdeveloped to maximize their mystery, and his evocation of modern urban youth culture is equally assured, with Moses and company’s repartee – chockablock with profane slang and pop culture references (Naruto, Simon Cowell) – exuding striking authenticity. In short, Attack the Block’s kids feel real, even if Cornish’s fairy tale eventually reveals its true desire to have Moses function as a symbol of disadvantaged and wayward youth righting itself through courageous destruction of its literal and figurative past. The central balancing act – between having Moses remain a nasty delinquent while also allowing him to achieve redemption through a form of inner transformation – is, like a half-formed subplot involving Moses’ beef with a drug kingpin (Jumayn Hunter), handled uneasily, thus leaving the rah-rah conclusion less ambiguous than simply of two conflicting minds. If the story’s socioeconomic concerns are raised too prominently to be dismissed, and then left too underdeveloped to be compelling, they’re still less troubling than the absence of terrifying tension to the proceedings, which are staged with ferocity but prove incapable of selling the idea that any character of consequence (including a typically stoner-ish Nick Frost, as a dealer’s hired hand) is in grave danger. It’s an impression that dogs much of Attack the Block up to its final moments, in which the grief of lost comrades is wholly ignored so that survivors might revel in their new social paradigm-flipping triumph. 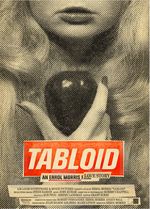 Errol Morris’ lightest, most amusing film since 1997’s Fast, Cheap & Out of Control, and yet nonetheless a companion piece to 2008’s Standard Operating Procedure in its investigation of media-filtered truth, Tabloid tells the truly outrageous tale of Joyce McKinney, a wannabe model and former Wyoming beauty queen who in 1977 became a UK gossip-rag sensation when she was charged with kidnapping her pudgy Mormon boyfriend at gunpoint and chaining him to a bed for sex (“The Case of the Manacled Mormon!”). That’s just the beginning of this it-keeps-getting-weirder story’s sordid twists and turns involving S&M photos, dominatrix call girl massages, and parties with Saturday Night Fever luminaries. It’s craziness that’s far better experienced without any prior knowledge of McKinney, and which Morris reveals through his usual style: prolonged interviews with his subjects, home movies and archival film footage and photographs, and graphics – in this instance, newspaper headline-style words superimposed on top of his speakers – that both augment the material’s tawdry energy as well as subtly contradict and critique his speakers’ accounts. Morris is fascinated by McKinney’s unbelievable life, which features two separate 15-minutes-of-fame stretches, the latter one thanks to her successful efforts to have South Korean scientists clone her dog Booger. Tabloid both revels in the un-self-aware, deluded McKinney and her sleazy exploits and regularly undercuts them with pointed questions and on-screen textual suggestions, all while using her stunning saga as an extreme case study of media sensationalism, the slippery line between fact and fantasy, and cultural obsessions with celebrity.