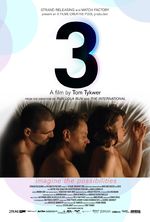 Tom Tykwer dazzles the eye and dulls the mind with 3, the Run Lola Run director’s tedious promotion of a new identity-definition paradigm. In modern-day Berlin, long-time couple Hanna (Sophie Rois) and Simon (Sebastian Schipper) are struggling with a loss of sexual excitement, a problem that leads first Hanna, and then Simon, into the inviting arms of Adam (Devid Striesow), a geneticist whose stem-cell research – in which new cells are created from old ones – provides Tykwer with a dreary central metaphor for his story’s advocacy of pansexuality as natural and progressive. That open-minded premise is essentially all there is to 3, which feigns interest in its characters as three-dimensional beings – layering them with dilemmas (Simon’s testicular cancer) and hang-ups (Simon and Hanna’s conflicted feelings over having children) – but rarely gets deep enough under their skin to make them seem like more than devices in a socio-political thesis. That’s especially true of Adam, who receives the least attention and thus comes across as the most paper-thin of the film’s three protagonists, and his featurelessness ultimately sabotages the increasingly tense threesome dynamic at play, since none of these people’s attractions to each other are ever fleshed-out or potently felt. Simplistic as its core may be, though, Tykwer manages the not-inconsiderable feat of habitually distracting attention away from his material’s underlying didacticism through aesthetic dexterity, with his rushing camera, his information-overload split-screens, and his fleet cross-cutting providing the material with far more urgency than does its let’s-all-get-together plotting.