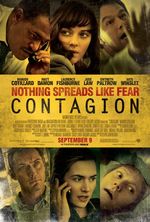 Everything goes viral in Contagion – most critically a rampant new disease that threatens to wipe the globe clean, but also fear, rumor, panic and information. Sharing with his Oscar-winning Traffic a multi-character, multi-focus structure, Steven Soderbergh’s pandemic thriller fixates on hands and mouths as they silently pass germs, and potential apocalypse, from public bus railing to restaurant water glass to gentle shoulder touch. That visual schema immensely heightens the tension of his tale (written by Scott Z. Burns), in which the sudden seizure-prefaced death of a cheating housewife (Gwyneth Paltrow) and her young son is the catalyst for worldwide illness. Soderbergh tracks numerous points along the response, from the woman’s seemingly immune husband (Matt Damon) and his daughter, to a CDC bigwig (Laurence Fishburne) and his on-the-ground right-hand woman (Kate Winslet), to a righteous blogger (Jude Law) who preaches conspiracy in the face of official government declarations. In certain cases – specifically, a thread involving a World Health Organization employee (Marion Cotillard) who’s kidnapped and held hostage in a small Chinese village – this fractured plotting detracts from the material’s dramatic urgency. But Soderbergh paints assuredly in quick, potent brushstrokes, particularly with regards to Damon’s protective efforts toward his daughter. The director’s digital cinematography has a swift anxiousness that further propels forward his depiction of the way in which not just viruses but ideas and feelings can spread and mutate in unpredictable and lethal ways. As much as it’s a high-gloss, star-studded, consistently gripping modern-age horror film apt to make one stockpile hand sanitizer, Contagion is also a portrait of the terrifying fragility of the tangled biological, social and emotional networks that govern our lives.

In the second half of the movie, the urgency of the actions of the health organizations seemed flat to me because he stopped showing the effects of the disease on a personal level when it transferred to the social level as an 'epidemic'.