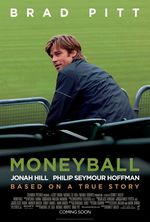 Co-screenwriter Aaron Sorkin’s baseball variation on The Social Network, Moneyball focuses on another outsider-rebel-wunderkind determined to upend traditional social and business paradigms through technological innovation via the story of Billy Beane (Brad Pitt), the general manager of Major League Baseball’s Oakland A’s franchise. Based on Michael Lewis’ book (and co-written by Steven Zaillian), and playing fast and loose with facts and contextual information, Bennett Miller’s film charts Beane’s efforts – after losing to the Yankees in the 2001 playoffs, and then losing his top three players to free agency because of strict budgetary concerns – to compensate for his club’s inability to spend like the league’s big boys by using statistical analysis to pinpoint unheralded players with potential. That idea comes courtesy of Peter Brand (Jonah Hill), a fictional variation on Paul DePodesta, who champions Bill James’ sabermetric approach to player evaluation, looking at key numbers (like on-base percentage) and ignoring more famous calculations like home runs and RBIs, a shift that angers Beane’s old-school scouts and leads to talk-radio ridicule until, lo and behold, the approach begins to pay dividends. Despite some moments with his daughter and doubts about his course of action, Beane remains throughout a two-dimensional figure, but a charismatic and decidedly human Pitt nonetheless embodies him with engaging verve, and Hill exhibits a droll understatement that helps enliven what amounts to a rather standard underdog-makes-good fable. For a film about insurgency from within, it’s disappointing that director Miller treats his material like conventional Oscar bait, but his stewardship is shrewd and light on its feet, and his integration of real-life footage into the proceedings is deft. Moreover, while it never strays far from its path, and more or less wastes Philip Seymour Hoffman in the limited role of A’s manager Art Howe, Moneyball manages the not-inconsiderable feat of transforming its true-life story into a feel-good fairy tale while also – courtesy of a sobering postscript – recognizing that sometimes, happily-ever-afters are more complicated than uplifting Hollywood films can manage.