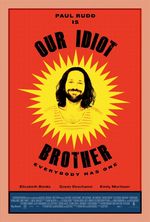 Paul Rudd is a divine moron who brings peace and harmony to his secretly miserable sisters in Our Idiot Brother, a pleasant-enough trifle that ensnares itself in the uneasy middle ground between indie drama and dumb-guy comedy. The titular doofus is Ned (Paul Rudd), a hippie who gets himself incarcerated for selling pot to a uniformed police officer, and upon his release eight months later bounces between the homes of his siblings, all of whose lives he temporarily shatters via uncontrollable truth-telling. Given his blissfully naïve, laid-back “hey man” vibe, Ned’s rampant honesty should result in hilarity, but Jesse Peretz’s film instead refuses to indulge in the very cartoonishness that might amplify the amusing atmosphere. Opting instead for toothless family squabbling and personal/professional crisis, Our Idiot Brother exudes engaging empathy not just for Ned but also his sisters – careerist journalist Miranda (Elizabeth Banks), frustrated stay-at-home mom Liz (Emily Mortimer), and bisexual artist Natalie (Zooey Deschanel) – as well as their various acquaintances. That’s fine as far as it goes, but that’s not quite far enough, as the action often coasts by on the cheerfully amiable performances of its leads, in particular Rudd, who layers Ned’s warm-hearted innocence with serious frustration at others’ inability to accept or reciprocate his guileless altruism and sincerity. Epitomized by its grainy, poorly lit low-budget aesthetics, the film exhibits a tossed-off slacker-ness that too closely resembles the attitude of its protagonist.

Nice Review! Paul Rudd is terrific as the loveable, good-hearted, naive Ned. His warmth makes this a feel good film, but the annoying sisters take their toll and nearly ruin my Rudd buzz.