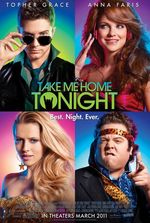 ‘80s nostalgia has evolved from cheeky fun to putrid cultural stain, and Take Me Home Tonight merely furthers that progression, trotting out shoulder pads, big hair, Michael Jackson dance moves and Appetite for Destruction album covers as dim-witted signs of tongue-in-cheek retro coolness. Along with these trappings – which also involve a soundtrack of the era’s hits that practically begs to be noticed, and an appearance by I Love the… talking-head Michael Ian Black – Michael Dowse’s film mimics its chosen decade’s cinematic conventions as well, charting a historically crazy night in the life of Matt (Topher Grace). An MIT grad fleeing career and responsibility to work at Suncoast Video, Matt, alongside his twin sister Wendy (Anna Faris) and best friend Barry (Dan Fogler), attends a high school reunion party where he aims to woo long-time crush Tori (Teresa Palmer). This formulaic nerd-gets-the-hottie fairy tale is embellished with all manner of wackiness – stolen cars! Cocaine! Cougars who want to have sex while their German boyfriends watch! – that feels as stale as its wink-wink nods to Whitney Houston and wearing sunglasses at night. The cast is game but dull beyond belief, with Grace a bland everyman, Fogler a manic wannabe-Jack Black, and Farris an earnest cipher stuck with a lame subplot involving her disinterest with boyfriend Kyle (Chris Pratt). Take Me Home Tonight offers up lessons on lying and honesty, fear and courage, but it’s all so much pap in service of wistfulness about a time period now thoroughly mocked to death.