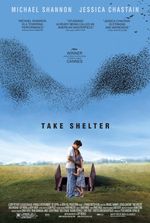 A mood of ominous psychotic dread and two finely calibrated performances successfully compensate for a slight final misstep in Take Shelter. Likely destined to be compared to Melancholia, another tale in which internal chaos threatens to manifest itself in apocalyptic external ways, Jeff Nichols’ superbly controlled film concentrates on Curtis (Michael Shannon), a construction worker married to Samantha (Jessica Chastain) and father to their deaf daughter Hannah (Tova Stewart) who’s wracked by terrifying dreams of cataclysmic storm clouds and motor oil rain that transforms pet dogs into feral monsters and strangers into would-be attackers and abductors. Given that his mother was beset by paranoid schizophrenia in her mid-30s, 35-year-old Curtis soon suspects he’s going mad. Library books, sleeping pills and sessions with a free-clinic counselor do little to dissuade him from his end-of-days fears, which he channels into fanatically remodeling the backyard’s subterranean storm shelter. That project entails extra loans and missing work, both financial risks made all the more perilous by Hannah’s upcoming surgery, and Nichols’ film finds true, bone-deep terror in the way in which Curtis’ behavior places his family on an all-too-contemporary precipice of economic ruin. Somewhat less showy than his similar turn in Bug, Shannon exudes haunting frantic-volatile-raging instability, and Chastain nicely balances that pent-up explosiveness with her own, more modestly composed variation on suppressed anger and fear. Even if his central shelter metaphor (of descending/ascension) feels a tad too obvious, Nichols’ formally assured direction exhibits dawning-dread restraint through slow zooms and tense framing, although the eventual revelation that Take Shelter wants Curtis’ lunacy to actually be in question leads to a conclusion that, while beautifully staged, comes close to reducing the proceedings to something of a surprise-ending gimmick.