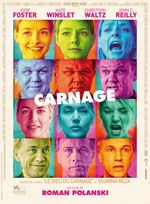 Peeling back societal facades of cheerful propriety and political correctness to reveal the ugliness of human nature is Carnage’s somewhat familiar and clichéd aim, yet Roman Polanski’s adaptation of Yasmina Reza’s heralded play “God of Carnage” offsets its familiar thematic arguments with deliciously nasty wit and fractured, tension-wracked visual framing. After a dialogue-free credit sequence reveals a playground spat in which one child whacks another in the face with a tree branch, the film opens in the apartment of Penelope (Jodie Foster) and Michael (John C. Reilly), the parents of the injured boy, where Nancy (Kate Winslet) and Alan (Christoph Waltz), the parents of the attacker, have come to cordially smooth things out. No such luck, as immediate, minor disagreements about a document’s use of the term “armed” soon devolve into out-and-out warfare between the two couples. A kindred spirit to Who’s Afraid of Virginia Wolf? (and, more subtly, Caché), Polanski’s script is a slow boil to eruption in which workaholic lawyer Alan’s cell phone interrupts all conversations, Penelope fumes with vein-popping indignation at her son’s victimization, Michael lets fly his sexist and racist opinions after being slammed for abandoning his kid’s pet hamster to die on the sidewalk, and stressed-out Nancy vomits all over the coffee table (ruining Penelope’s precious catalogs). From Penelope’s faux-humanitarian desire to write a book about Darfur to Alan’s general disinterest in family (and its responsibilities), the urban upper middle class and its socio-cultural pretensions are eviscerated as a pose masking greed, self-interest, contempt and hate, which Carnage lays bare with rat-a-tat-tat writing elevated by a quartet of biting performances. More impressive still, though it’s material is clearly stagey in construction – with the proceedings limited to the interior, and hallway just outside, its apartment location – Polanski’s direction is as assured as ever, creating so much friction between his frame’s foreground, background, and left/right/up/down quadrants that his aesthetics mirror, with pinpoint precision, the action’s composed and yet immensely edgy dynamics.