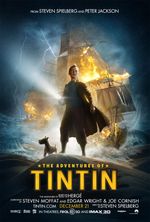 Credit motion-capture technology for reinvigorating Steven Spielberg, who with The Adventures of Tintin (produced by Peter Jackson, who will direct its forthcoming sequel) recaptures the same buoyant, childlike B-movie zest that powered his first three Indiana Jones efforts. Never has the oft-derided animation process been put to better use than in this faithful imagining of Hergé’s iconic mystery-solving boy reporter Tintin (Jaime Bell), whose signature upturned coiffure, long coat and exclamations (“Holy Snakes!”) are brought to life with a bracing blend of photorealism – also found in the faces of its supporting characters (note a Moroccan bazaar’s populace) and exotic locales – and pliable rubbery cartoonishness. The effect is a surprisingly entrancing mix of the real and unreal, a technological achievement that’s more than matched by Spielberg’s direction. With his virtual “camera” zooming, plummeting, spinning and soaring about its expertly detailed environs, Spielberg takes full advantage of not only CG’s anything-goes potential but also of 3D, as the director – from a beautiful silhouetted credit sequence to centerpieces involving car chases, plane derring-do, and nautical hijinks – creates thrilling, dynamic tension between foreground and background.

Written by Steven Moffat, Joe Cornish and Edgar Wright (and boasting the same gonzo energy found in the latter’s Scott Pilgrim Vs. the World), The Adventures of Tintin sends its hero on a quest regarding a long-sunken pirate ship’s treasure sought by villainous Ivanovich Sakharine (Daniel Craig). Paired with Haddock (Andy Serkis), the always-drunk descendant of the mysterious ship’s captain, Tintin embarks on an adventure that plays to Spielberg’s fondness for the relationship between men and their male forbears, though action and humor are the thing in this rollicking saga, which comingles mile-a-minute thrills and gags to a point that borders on the frenzied. Even so, the sheer vibrancy of Tintin’s stout resourcefulness and bulbous-nosed Haddock’s sloshed intrepidness do much to lend the proceedings a decidedly human center. Like the Indiana Jones films, Tintin boasts a wide-eyed fondness for tales involving ancient buried fortunes, plentiful globetrotting, and predicaments that – as with the pursuit of a pickpocket by Tintin and bumbling twin cops Thompson (Simon Pegg) and Thompson (Nick Frost) – meld danger with slapstick comedy. That marriage reaches a crescendo during a harried pursuit through Moroccan streets that’s captured in one prolonged shot – a sequence that, no matter the digital trickery involved, is a pure marvel of sustained choreography, imagination and pulse-pounding excitement.