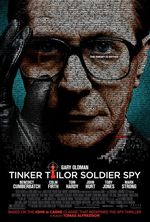 Tinker Tailor Soldier Spy is a film about death, and the dead men who willingly and hopelessly ensnare themselves in lies, subterfuge and detached amorality. Condensing John le Carré’s seminal 1974 spy novel (originally adapted into an Alec Guinness-headlined 1979 BBC miniseries) into an efficient, chilly feature-length gem of formal rigor and atmospheric bleakness, director Tomas Alfredson’s espionage yarn roots itself in the fall of post-WWII British imperial/military dominance via the figurative resurrection of secret agent George Smiley (Gary Oldman), who’s brought back into the fold of the MI6 (“the Circus”) – after having been let go for a mission gone awry a year earlier – to uncover a Russian mole within his covert group. That mission necessitates unraveling a web of deceit involving Hungarian defectors, Russian double-agents and a bevy of possible traitors-within-his-midst, an anxious and claustrophobic universe that Alfredson visualizes with austere, methodical cinematography comprised of compositions awash in harsh angular lines and constricting geometric shapes. Bolstered by a superb cast and – through a recurring flashback to an MI6 Christmas party that captures the depressing absurdity of these spooks’ existence – a very subtle, sly black-humor drollness, Tinker Tailor generates tension from both its aesthetic and narrative stillness. In the same vein, Oldman’s Smiley boasts an outward placidness that can’t quite mask the chest-gripping pain of his wife’s (and cohorts’) betrayal. With the actor’s subtle, evocative modulations of expression and comportment working in tandem with Alfredson’s deft editorial structure (full of gliding, graceful montages), it’s a film that conveys a hauntingly cynical view of a world in which allegiances are illusory, ethics and loyalty are unreliable, and one’s efforts to affect change – positively or negatively – make little, if any, lasting impact.