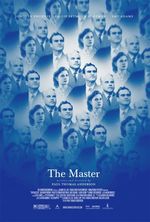 A taut, unnerving thematic follow-up to There Will Be Blood as well as the work of Stanley Kubrick, Paul Thomas Anderson's The Master investigates the line between bestiality and civility through the 1950 story of Naval veteran Freddie Quell (Joaquin Phoenix) and his burgeoning relationship with new age guru Lancaster Dodd (Philip Seymour Hoffman). With a hunched, gaunt body, his arms habitually on his hips so that his elbows stick out like jagged wings, and speaking out of the side of his crooked mouth, Quell is a physically and psychologically twisted individual who, returning from war to work as a department store photographer, spends his days snapping shots of happy faces unlike his. Driven by base urges to drink, screw and lash out against the world with violence, Quell is an uncoiled spring. And to Dodd – a man (clearly based on Scientology founder L. Ron Hubbard) developing a cult facing establishment persecution with whom Quell accidentally hooks up – Quell seems the perfect candidate for "platforming" therapy, which seeks to unlock the original, "perfect" self that's in complete control of itself. Yet as evidenced by his baby-talk paternalistic relationship with the vet, as well as his own penchant for sudden angry outbursts, it also becomes increasingly clear that Dodd subconsciously views this outcast as not just a patient, but as a kindred "animal" spirit.

Anderson's interior spaces (department store, boat cabins, a Pennsylvania house) reflect his characters' circumstances – including Dodd's pent-up true-believer wife Peggy (Amy Adams) – as being circumscribed by both a society that doesn't accept them, and by their own inner fury, misery and discontent. The director visualizes this without look-at-me flair, regularly highlighting the disconnect between foreground and background spaces through varying shallow and deep focus cinematography. Paired with Jonny Greenwood's nerve-jangling clickity-clacking score, his aesthetics have a cool, measured beauty that create an unerring mood of volatile madness, and of a need to escape, as evidenced by those few moments (a sprint across a field; a motorcycle ride through the desert) that find characters fleeing toward some indistinct and unattainable freedom. The Master's primary tension, however, is rooted in the push-pull between Quell and Dodd, two men desperate to find a way toward peace and contentment. It's a process stymied by their underlying rage, epitomized by their shared love of Quell's unique alcoholic concoctions – which are made with paint thinner and, thus, akin to poison – and one that, in Quell's case, Anderson links to There Will Be Blood's Daniel Plainview in an early shot of Quell descending into a deep, dark naval ship chamber where the man actually drinks liquid pouring out of a missile (a haunting vision of imbibing violence).

The Master's critique of Scientology is plain, intermittently jabbing at the organization's belief in aliens, trillion-year-old spirits, and inconsistent philosophy, the last never more pointedly than during a late conversation between Dodd and an acolyte (Laura Dern) about his new book's terminology that concludes with an incensed outburst that exposes Dodd as a charlatan. Nonetheless, that thread is secondary to Anderson's portrait of anger and the ways in which men attempt to control and/or embrace it – a depiction that, in a scene of kicking and screaming ferocity in a jail cell, also associates Quell with Raging Bull's Jake LaMotta. As ironically insinuated by his name, Quell can't quell his sex-alcohol-fight urges, and yet through Quell's work with Dodd, Anderson finds more hope for his protagonist, who at least is honest with himself about his true nature, than for Dodd, a man consumed with perpetrating (to himself and others) a false sense of enlightened poise and restraint. Their rapport is the lifeblood of The Master, and made titanic through the commanding hot-air bluster of Hoffman and the magnetic intensity of Phoenix, the latter of whom embodies Quell with an impulsive wildness that's colored by hints of deep-rooted longing and heartbroken anguish, most centered around a lost love. At once explosive and ramshackle, unpredictable and expertly modulated, it's a magnetic performance that's nothing short of primal, and masterful.

Is this really the first review you've written specifically for this website since Dragon Tattoo? Good review.

This is not the right place to bring this up, but I've been dying to read your thought on Friday the 13th series and the link is broken. Can you please make these available?